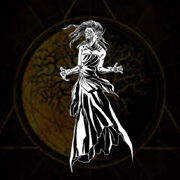 "I am born of the green glens of my ancient homeland, a sleeper of the mound. I am a watcher of noble families and sometimes sing the secrets of the dead."

Although she may appear as a combination of withered old hag and supernaturally beautiful, she really has good intentions.

Historians have traced the first stories of the Banshee to the 8th century which were based on a tradition where women sang a sorrowful song to lament someone’s death. These women were known as ‘keeners’ and since they accepted alcohol as payment, they were said to be sinners and punished by being doomed to become Banshees.