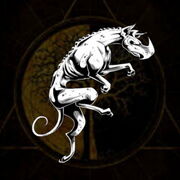 "You'll find me wandering about in Minnesota and Wisconsin deep in the night. Be careful not to leave your axes out- you might find them handle-less by morning."

One of a number of bizarre creatures from the folklore and tall tales of American lumberjacks. The Axehandle Hound is one of a group of beings, often called Fearsome Critters, which originated in the minds of men enduring the isolation and wildness of the landscape around Wisconsin and Minnesota during the 19th century.

The Axehandle Hound is described as having a long thin body in the shape of an axe handle with small squat legs, and a head resembling the head of an axe. It is said to consume the handles of any axes left unattended!.

This Cryptid was first reported in 1922 by lumberjacks at lumber yards and camps.