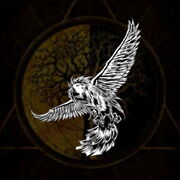 "I once pressed the orchard grass with my bare feet, now I crawl among the rocks. Pleasure abounds in the touch of the earth."

Ascalaphus is the chief gardener of Hades, son of Acheron and an infernal Nymph (a Chthonian spirit), maybe Gorgyra or Orphne.

The one bright spot in gloomy Hades is an orchard of pomegranate trees. Persephone, Spirit of Spring Flowers, took comfort there during her captivity. Ascalaphus handed her some pomegranate seeds and bade her eat them. When she had the opportunity to leave Hades provided she had consumed nothing, it was Ascalaphus who revealed that she had eaten the seeds.

Demeter took revenge: she transformed him into a lizard and buried him beneath a rock. Eventually Heracles moved the rock andhe escaped, but Persephone then transformed Ascalaphus into a screech owl. In that shape he remains, seated on Hades’ shoulder or serving as Hades’ spy. Those seeking a traditional poison garden might request Ascalaphus’ assistance and gardening tips.

Familiars will protect its summoner and attack along with them.

Ascalaphus will assist its summoner by help heal.