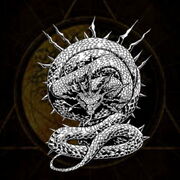 "I am the bringer of chaos. The Underworld rumbles at the sound of my great roar, casting fear into the hearts of many."

Apep was first mentioned in the Eight Dynasty (early 22nd century BC) and he was honored in the names of the Fourteenth Dynasty (between 1805 - 1650 BC) king Apepi and of the Hyksos (before 1650 BC) king Apophis.

In Egyptian mythology, Apophis is the name of the great cosmic moon serpent that coils around the heavens. It emerged from the great abyss at the time of the creation, omitting a great roar that still echoes across the universe. Every night it tries to deny light to the world by capturing the sun god as he journeys in his celestial boat across the sky. With the help of the guardian serpent Mehen, Ra always escapes – and in the struggle that follows, Apophis’ blood stains the sky red.

Occasionally Ra may be captured briefly, resulting in an eclipse of the sun.

Guardians protects its summoning location - intended/good for Places of Power and Portals.