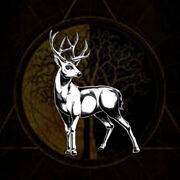 "I have known death, but death does not keep me. I can take many forms but favor the fire-eyed stag. I am only happy in wandering and sporting with frail human minds."

This spirit often protects animals, especially the females and the young ones.

Anhangá is often mistaken for Anhanguera because of the words being similar.

Legend has it that Anhangá punished hunters who mistreated animals and the forest. The invaders could take invisible blows, horns and kicks, or fall under the spell of magical illusions, getting lost in the woods or worse.