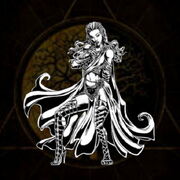 "I am protectress of Rome and keeper of her secrets, I shall hold her true name for eternity."

Her name have roots from the Etruscan word "Ancaru".

Also known as Diva Angerona, she's a primordial goddess of silence and secrets. She is also the goddess of deliverance from pain, sorrow, and anguish.

She is Rome’s protectress; the guardian of its secret name, which could not be publicly revealed or even uttered aloud lest enemies learn it and gain power over the city. (Some suggest that Rome’s true name is that of this goddess.) Angerona is also a painkiller, relieving physical, emotional, and psychic suffering. She communicates telepathically.