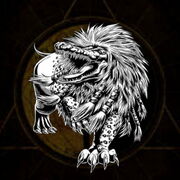 "I am the devourer of the dead. I rest in the underworld, and feed off the souls I call my meals."

She was a demoness and a funerary deity. Ammit sits beneath the Scales of Justice like a dog waiting for food to fall from the table. Those whom the infernal court finds lacking are promptly fed to Ammit. She is a neutral spirit: she doesher job, eating, processing, and eliminating wickedness (or just lack of goodness) from the universe.

Her body is part lion, hippopotamus, and crocodile.

She was not worshipped; instead she was gravely feared.