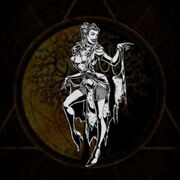 "I and my daughters are leechers of life drawing upon blood and spirit alike. We crawl as the insect and seduce as the irresistible maiden."

Aluqa is an ancient vampiric demon that typically attacks men, like a succubus, but can also cause madness (victims often will ashamed to be seduced by Aluqa that they'll commit suicide).

She exists throughout the entire Semitic world and often described as alluringly beautiful, though she may travel in the form of an insect.