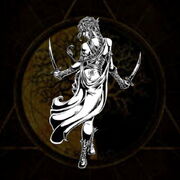 "I am shaman, sorceress and maiden of the sword and lance. My love is war. My rival is Scatach, though I am her better."

She was known as the "greatest of female warriors". She is described as the rival of Scatach, who trained Aife. Both spirits are sorceresses, shamans, and mistresses of the martial arts.

Some accounts claimed Aife was the twin sister of Scatach. Scathach and Aife became arch-enemies and were constantly at war with one another.