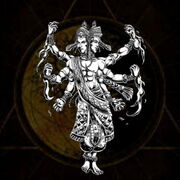 "I am the Hindu God of Fire, Lightning,, the Sun, and of Hearth. Perform a dance of fire in my honor and it will please me greatly."

His name literally means "fire": the name is etymologically related to ignite. Because Agni is fire, he is a deity with whom people have daily contact. He is fire and he is the spirit of fire. When you gaze at a flame, you gaze at Agni.

In the Vedas, Agni is a major and often invoked god. Over two hundred hymns in the Rig Veda are dedicated to him. Eight of its ten books start with praise for Agni as Vedic Lord of Fire.

Agni is fire and lightning. He also manifests in the form of a three-legged, two-headed man. Each head has seven tongues of flame. He has two or seven arms. His faces are red; his eyes and long, wild hair are black. His face shines from butter smeared on it.