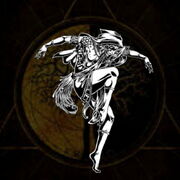 "My beating heart is fashioned from the black soil. I am a primordial dweller in the deepest quarters of the earth, when I lift my breath the earth heaves."

He's an orisha (primordial spirit) of the forces of Earth, especially violent, powerful, cataclysmic upheavals. When tectonic plates move, that's Aganyu. He is the orisha of volcanoes. Lava is his breath.

Aganyu is generally a solitary spirit who dwells in the wilderness. He is the patron of travel and transportation and is syncretized (unified) to Saint Christopher in the Cuban religion known as Santeria.