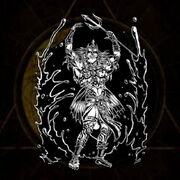 "Primeval spirit of the sea, I was ancient when the earth still lived beneath the waves. I live to host and bring cheer to the halls of man and gods alike."

Spirit derives from the Norse mythos.

Ægir literally means “sea.” Aegir is the presiding spirit of the ocean. He may also be understood as actually being the ocean. He is portrayed as a Jötunn but some myths he is referred to as something older than the Jötunn.

Aegir’s palace beneath the sea is also a realm of the dead. Those who die at sea or whose bodies end up in the ocean are believed to journey to his realm. He has powers of manipulate alcohol, sea animals, and ocean.