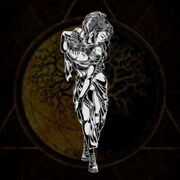 "I am benefactress of my beloved Rome. A siren of the Seven Hills. Few spirits can match my wealth, none my beauty."

Spirit derives from pre-Roman Italy (around 500 BC).

There's several legends about Acca Larentia, including being the Mother of Lares and being the benefactor of Rome.

One story says she was a sex worker who amassed a fortune and bequeathed it all to Rome. Another suggests that she was the beautiful prize given to Heracles for winning a game of dice. She was locked in his temple. When the deity (or his priests) had enough of her, she was advised to marry the first rich man she met. She did, eventually inherited his estate, and bequeathed that to the Roman.

The most popular version of Acca Larentia’s myth is that she was the wife of Faustulus, the Shepherd who found Romulus and Remus and thus the foster mother of the founders of Rome.